Why yes, this is a new dress.  Thanks for noticing.  I managed to drag my ass out of the house yesterday to go to Italian Day on Commercial Drive with my friend.  I’m not the hugest fan of street festivals, mainly because I hate crowds, but I like to attend them occasionally and it was fun.  Hot and crowded, but fun.  I shaved my legs really quickly in the morning before leaving the house, but my electric razor died before I was done.  But I figured it was okay that I didn’t fully shave, since that could be my way of celebrating Italian Day.  Since people in European countries aren’t as obsessed with shaving as we are in North America.  There were lots of booths and vendors selling various goods and food.  Of course I would stop to look at the ones with dresses.  I can’t remember which store this one was from, but they had a booth set up and some of the racks had dresses priced at 2 for $30.  So this is one of the 2 I decided on.  I didn’t try them on, so I wasn’t sure if they would fit properly, but I decided to risk it.  It’s a little loose, but otherwise fits well.  Better too big than too small, because I’m not going to try squish into a dress that doesn’t fit.  My only regret is that I didn’t buy a Janet Jackson shirt that they had in the same booth, especially since she’s touring this summer and I could’ve worn it to her concert.  But maybe I can go back and still find at some point.  I really like this dress because it’s so bright and colourful.  And it just so happened that my green Ross cardigan would match exactly the colour of green in the dress.  It’s like it was meant to be.  I wore it with my green and gold jewellery, necklace and ring from UBC, earrings from a Lansdowne kiosk, and bracelet from Dollarama. 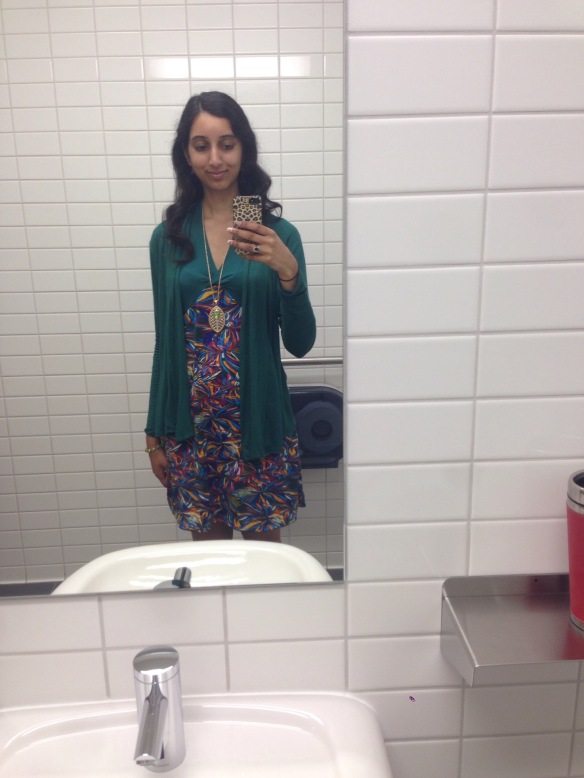 Yay for adding more colourful dresses to my wardrobe!