So I wore a dress with no leggings on Tuesday, not realizing how cold it actually was.  What a fail.  If there was ever a day when I should have worn pants, that was probably it.  But my leg hair was growing back fast, and I wanted to go bare legged while I still could without having to shave again.  I’m stubborn that way.  I don’t dress based on the weather.  I dress based on whether or not I’ve shaved, and based on what clean clothes I can find that sort of match.  I knew it might be cold and rainy that day, but I didn’t care.

This dress is slightly longer than my other dresses, so somehow I thought that would make it more weather appropriate.  I got it at an Orb warehouse sale at the River Rock Casino.  I feel like I should be wearing a cowboy hat or something, just because I’m wearing denim.  When I was in high school, at an all girls school, they had an idea one year that they would make Valentine’s Day fun by making it a “couples day”, where you could find a partner and dress as some sort of famous couple.  My friend and I did Brokeback Mountain.  I was Heath Ledger.  And I was amazing.  But we unfortunately didn’t win a prize for our awesome efforts.  Probably because it was also a Catholic school and they weren’t ready to accept our same sex love story.

Anyway, I love jean jackets.  I got this one at Old Navy on Robson Street downtown when I had leftover super cash to spend.  I didn’t want to wear an actual rain jacket or anything even though it was cold, because it’s June and I’ve set aside the boots and the jackets.  But this jean jacket seemed acceptable.  It looks as though I haven’t quite set aside the scarves just as yet.  At least not for cold days.  I got this one from a vendor at the UBC Sub.  I got the red necklace as a Christmas gift from my grandma.  The Supernatural wing earrings are from Fan Expo Vancouver, my ring is from UBC, and my bracelet is from Suzy Shier.  I thought about touching up my nails, but I think they’re too far gone now so I’ll just let them keep chipping away until there’s nothing left to see. 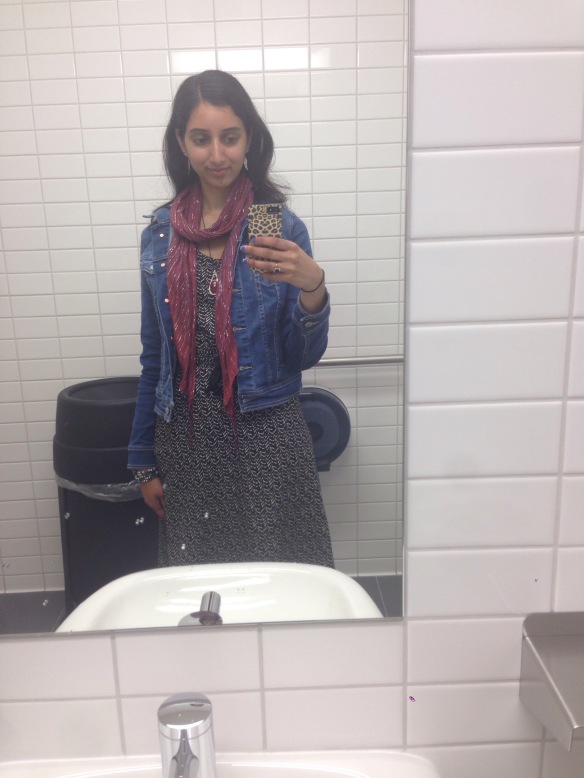 Public transit is most definitely not the place to be if you want some eye candy. It’s pretty much always filled with gross people. Especially in the morning. I don’t like to be judgemental, but commuting just tends to bring out that side of me and cause me to see the worst in people.

This morning was not really an exception. I am still surrounded by people I would rather not see. But there were a few people who stood out, I think in a good way.

I’ve been meaning to blog about how, for some strange reason, I think crutches make a guy more attractive. I won’t get into that right now, I’ll save it for a later post. But on that note, as I was leaving the sky train station this morning, I saw two guys getting off the elevator. The elevator? I know, who takes the elevator? A man on crutches, that’s who. Only one of them had crutches, the other guy was just taking it with his friend. I imagine it would have been awkward had he just ran to the stairs and left him behind. The guy on crutches probably could have managed on the stairs, it would have just taken him an insanely long time.

He was a bit of a nerdy looking guy, but not overly. Just a little bit. Maybe I only think that because he wore glasses. He still seemed pretty manly though. Alas, we were walking opposite directions, so I couldn’t look for too long. If you asked me what his friend looked like, I couldn’t tell you. I was only looking at him. Yes, it was because of the crutches. I don’t know why. But they just enhanced his look somehow.

When I got on the bus later, there was a guy at the back corner, with his head down, wearing a cowboy hat. Now I don’t encounter a lot of cowboy hats ever during my commutes. He also had glasses. And a Darth Vader shirt. And was reading a book. I don’t know why I’m into nerds this morning. Must be something in the air. With his head down and covered by the cowboy hat, I couldn’t really get a good look at his face. But that was okay. It’s probably best that way. From what I saw, he wasn’t bad. But I feel like if he removed the hat, I wouldn’t like him as much. The cowboy hat made him different, made him stand out. And I liked that. I wonder if maybe he was going to some sort of cowboy convention. Is that a thing? Followed by a Star Wars convention? Who knows.

There was this guy working at the side of the road at 41st and Dunbar. Not sure what they’re working on there, there’s always developments and construction of some sort going on. He was standing there, with a big shovel in his hands, digging. He had ear buds in, listening to music while he did his work. He wore a long pair of shorts and a beater, showing off his strong arms. There was nothing nerdy about him. But then I don’t know what music he was listening to, so I guess I can’t really make that call. But yeah. Sometimes the bus will stop at Dunbar for a few minutes. Often I get really annoyed by that delay. But today there was no delay, we stopped at the stop and then left right away. And for the first time, I was disappointed by this. Because I would have liked to have had another glimpse of that beautiful man. I don’t suppose he’ll still be digging there late this afternoon. He seemed like a hard worker, who wouldn’t mind a long shift. But chances are the next time I go by there, it’ll be some fat old guy with a pot belly. Such is my luck.

So yes. Those are the three guys who stood out to me this morning and kind of made it better. I know not where any of them are at this moment. Although I assume the guy with the big shovel is still over there digging. But for how much longer, I don’t know. But yes. Crutches, cowboy hats, and shovels. I have weird taste.